What does EirGrid do?

EirGrid plans for the future of Ireland’s electricity grid and operates it every minute of every day. This includes interconnecting to neighbouring grids and running the wholesale electricity market. We ensure that everyone has power when they need it at the most economic price possible. The grid safely brings power from generators to the ESB network that supplies every home, farm, community and business in Ireland. It also brings power directly to large energy users like high-tech manufacturing and data centres.

Why is electricity a solution to climate change?

Electricity can be generated from renewable sources like wind and the sun. These sources of clean energy will reduce our reliance on fossil fuels like coal and oil. Because of this, electricity will increasingly be used for more reasons, like transport and heating.

To prepare for this future, the Irish Government has asked us to make the grid ready so that at least 70% of Ireland’s electricity can come from renewable sources by 2030. At present, around 40% of electricity used throughout the year comes from renewable generation. The 70% target is a step towards the ultimate goal of achieving net zero carbon emissions by 2050. This is climate action - which is essential to reduce the life-threatening risks of the climate crisis.

How does the electricity grid work?

Moving large amounts of electricity around Ireland requires over 6,600km of overhead lines and underground cables. This is the grid – and it’s been safely bringing power from generators to users for decades. The map further down this page shows where Ireland gets its electricity, and the transmission network that moves this power to where it’s needed.

Why are we talking about Ireland’s electricity future?

The grid will require unprecedented change in the next ten years. We project that Ireland and Northern Ireland will need at least another 10 gigawatts (GW) of electricity from clean sources – if not more. That’s roughly twice as much sources of clean electricity to what  was available in 2020. This power will have to be generated, connected to the grid, and delivered throughout the island.

Ireland’s transition to clean electricity will be challenging, but will help deliver investment and jobs. It will also make Ireland more energy-independent, and will significantly reduce air pollution due caused by electricity generation.

Electricity grid – January 2021
Every line and cable on the grid operates at a certain voltage, indicated in kilovolts (kV). The higher the voltage, the more power it can carry. 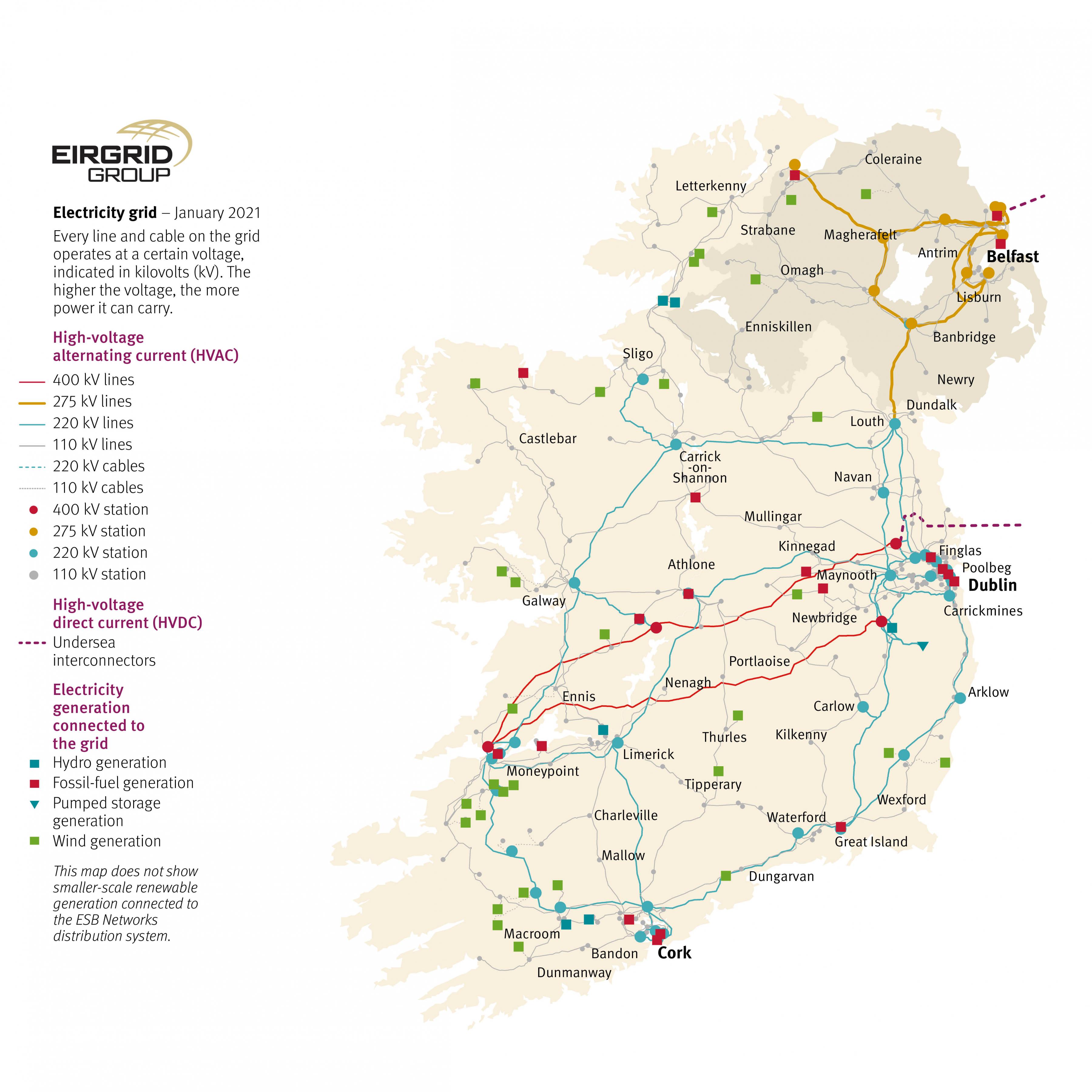 The map does not show smaller-scale renewable generation connected to the ESB Networks distribution system.

How will this consultation process work?

This document is a summary of our initial thinking on how the electricity grid could change so Ireland can have at least 70% clean electricity by 2030. There are several ways to approach this challenge, and they each have different outcomes.

This consultation is about finding a balance between the benefits and potential impacts of each approach. We want to hear what you think – to help us make decisions that reflect your views.

At the end of 2021, we aim to publish our final strategy. This will shape the next nine years of specific changes across individual projects. Each of these projects will then have extensive public consultation and will follow the normal planning process. But by talking to us now, you can affect how the electricity grid evolves in the next decade.

Why will we all be using more clean electricity in future?

After generations of burning fossil fuels, we must now work together in response to the resulting climate crisis. Without action, the changes in our weather systems will threaten how we live.

In response, governments are taking collective action to reduce carbon emissions. This means we have to find new ways to meet Ireland’s increasing need for energy without relying mainly on burning fossil fuels.

Electricity helps make this possible, as it can be generated from clean and renewable sources like the wind or the sun. These sources of energy will never run out, and they don’t have carbon emissions that cause climate change. This means renewable electricity will increasingly replace fossil fuels like coal and oil. Natural gas will still be used to generate some electricity as a backup when we can’t rely on the sun or the wind.

What does this mean for the electricity grid?

Meeting a greater need for power

The grid will need to need to carry much more power. In 2020, the demand for electricity was twice the amount used in 1990. Yet that demand will increase again – and substantially – in the next ten years.

These projections are based on the increasing use of electricity for transport and heating. But they also reflect the increasing demand for electricity from high-demand users. These include pharmaceutical plants, high-tech manufacturing and data centres.

By 2030, most of the electricity on the grid will need to be generated from clean, renewable sources – like the wind or the sun. However, the amount of electricity from these sources depends on the weather. We can’t easily or economically store large amounts of electricity, so we have to allow for this variability. Also, Irish sources of renewable electricity have typically been far away from where most power is used.

The grid we have today cannot carry this much extra power, let alone move this much power cross-country from renewable sources. To prepare for this future, the electricity grid needs to be made stronger and more flexible.

Managing a decade of grid upgrades

These challenges need a decade of new projects to upgrade and add to the grid. Without this work, Ireland won’t be able to rely on a secure supply of electricity, and we won’t have at least 70% of this power coming from clean sources by 2030.

Finally, this consultation presumes that existing grid upgrades – such as the North South Interconnector – will go ahead as planned and on schedule. Without these existing projects, it will be difficult if not impossible to achieve 2030 goals.

All our draft approaches depend on support and flexibility from our partners and stakeholders. This includes Government, regulators, and from all those who work with us on Ireland’s electricity system.

What are the challenges of clean electricity?

EirGrid does not generate electricity – we transport it from generators across the grid. We use the grid to supply power directly to large energy users and to ESB Networks. They then distribute electricity to every user in the country, including hospitals, schools and homes.

The changes we discuss in this consultation are so the grid can meet the unique challenges of renewable electricity. This form of energy:

We are obliged to connect new generators to the grid, no matter where they choose to locate. Ireland’s greatest source of renewable energy is wind, and the strongest and most reliable source of inland wind power is in the west of Ireland. Similarly, the greatest potential for solar power is in the south of the country. However, most of Ireland’s electricity is used on the east coast.

Moving this much power across the country is a huge challenge. We need to make the grid strong enough where we’re connecting renewable generators, then build or strengthen our network to move their power. This would require a huge number of projects to upgrade or add to the grid.

Upgrading the grid without disrupting your supply of electricity

We can’t make major changes to the grid while power is flowing – and neither can we turn it all off to get work done. If we are to keep Ireland’s electricity secure, we have to carefully sequence the timing of grid projects to ensure we keep the lights on. This limits how many projects we can complete at any one time.

Informing the public and responding to their concerns

We know that new grid infrastructure projects lead to robust and emotive debates. Communities expect compelling and persuasive reasons for disruptive change. That’s why we offer the public an opportunity to influence our decision-making process. We aim to build trust by clearly explaining our goals and our limitations, and then asking for your response. Where possible, we aim to propose final solutions that reflect your views – and so are more likely to be accepted.

Responding to these challenges

All these factors influenced our thinking – and informed the four draft approaches that we now offer for consultation.

What do we need to achieve? 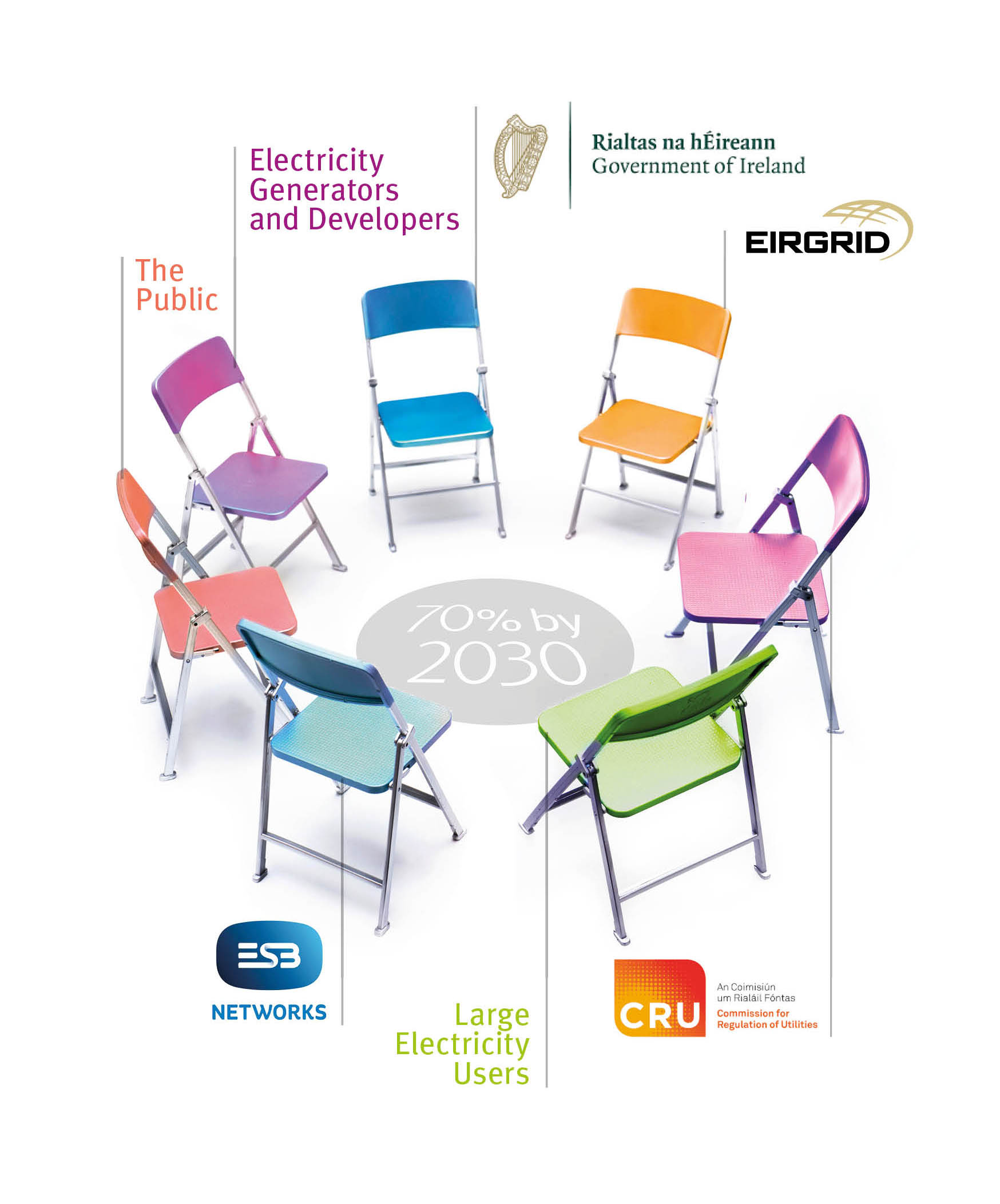 EirGrid has been set a task by government – to get the electricity system ready for a future with much fewer fossil fuels like coal, oil and gas. Specifically, we have been asked to prepare for at least 70% of Ireland’s electricity coming from renewable sources by 2030. This is a key step towards the ultimate aim of Ireland having net-zero carbon emissions by 2050.

Who do we need to work with to achieve this?

EirGrid, as the operators of the grid, will play a key role, but we cannot deliver this goal on our own. This is a target that will require change across the entire electricity sector. There needs to be action from electricity generators and developers, from regulators, from government, from ESB Networks, and from large-scale energy users. All key players will need to work together, and there will be a need for flexibility and innovation from all.

This consultation is based on what EirGrid can do, but it also considers how others in the electricity sector can help reach the 2030 target. In fact, some of the four draft approaches we propose are dependent on what other organisations can do to make this target possible.

Because of this, and of the complexity of this ten year transition, the four draft approaches are not standalone solutions. There are some foundation projects that are common to all four approaches – and the final plan is likely to include elements of all approaches, strongly led by one of them.

Is it possible to reach the 2030 target with all four draft approaches?

No. It’s important to be open about how hard it is to reach the 2030 target. One of our four draft approaches will achieve at least 70% – but not by 2030. Another of the draft approaches also has a high risk of missing this deadline. We have included these approaches so you understand the scale, cost and impact of moving towards clean electricity. We need to hear your views so we can make the best possible decision.

What do we need you to do?

You will now learn more about each of our four draft approaches to prepare Ireland’s grid for clean electricity. We then need your feedback so we can create a final strategy. This strategy will then lead to specific plans for each of the individual projects that need to be delivered before 2030. All of these projects will be put to public consultation and will be subject to planning permission, as usual.