Option A - The Red Route

Option A - The Red Route

Option A is the shortest of the four cable route options at 37km but has the longest off-road section of approximately 9km. It potentially affects the largest amount of agricultural land of the four route options but has a relatively low impact on regional and local road networks.

From Woodland, Option A will travel south through fields for around 3 km until it joins the R156 at Barstown Industrial Estate. From there, the route will travel east as far as Dunboyne, detouring north with the R157 once it reaches the north-western outskirts of the town.

It will cross the:

Work on the motorway itself will be avoided as any crossing here will likely be via Horizontal Directional Drilling (HDD) or via a tunnel. A potential off-road corridor is shown for this crossing of the motorway. The route will then briefly progress north along the R147 before travelling east once mo L and local roads.

Option A will advance east to Kilbride, with three crossings of the Ward River along the way. Here, the route moves south, passing Kilbride National School, where it crosses the Ward River again. A potential off-road corridor is shown for the route to the south of Kilbride. The route will pass through this corridor and join the R121 a short distance to the west of the M2. A further off-road corridor is shown for the crossing of the M2 motorway. Following the crossing, the route continues east to the Ward Cross and stays east on this road until the R121 reaches the R122.

Option A will then progress south via Kilreesk Lane and Kilreesk Road to the R108 and Naul Road along the northern boundary of Dublin Airport as far as Cloghran Roundabout, northeast of Dublin Airport. From there, Option A will briefly use Stockhole Lane travelling east to the M1 motorway. A potential off-road corridor is shown for this motorway crossing. Once across the motorway, Option A remains off-road; a potential off-road corridor is shown for the onward connection south to Belcamp substation. 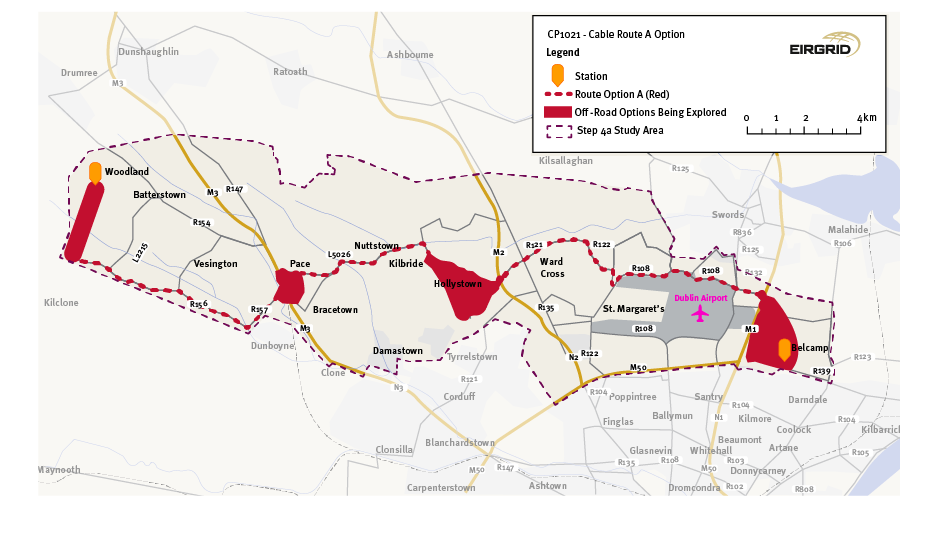 Figure 5: Option A: The Red Option
Click to enlarge and zoom