Option B - The Green Route

Option B - The Green Route

Option B is the second shortest of the proposed route options at 38km, with the second longest off-road section of approximately 7km. It shares a common route with Option A in multiple sections between Woodland and Belcamp but follows an alternative path for more than half of the course.

Option B will travel off-road in a southeast direction from Woodland until it reaches the L2215 in the townland of Lismahon. A potential off-road corridor is shown for this. At this local road, the route travels south in the road to the R156. From there, the route option will advance east along the same route as Option A, avoiding Dunboyne.

It will cross the:

The motorway itself is avoided as any crossing here will most likely be via Horizontal Directional Drilling (HDD) or via a tunnel. A potential off-road corridor is shown for th crossing.

The route will then re-join the R147 and progresses south as far as Bracetown Business Park. It continues northeast along this road until it joins another shared route with Option A for the 4 km leading into Kilbride.

However, in Kilbride, the proposed Option B travels north out of Kilbride and along a narrow road, through the townlands of Baytown, Mabestown and Irishtown.

Option B will cross the M2 Motorway at the flyover to the west of Coolquay, before joining the R135 in the village of Coolquay. A potential off-road corridor is shown for this motorway crossing. It travels south from there through the Ward Cross to Broughan. The route then travels east once more, joining the R122 via Broughan Lane and Newtown Cottages, rather than continuing as far as Kilshane Cross. 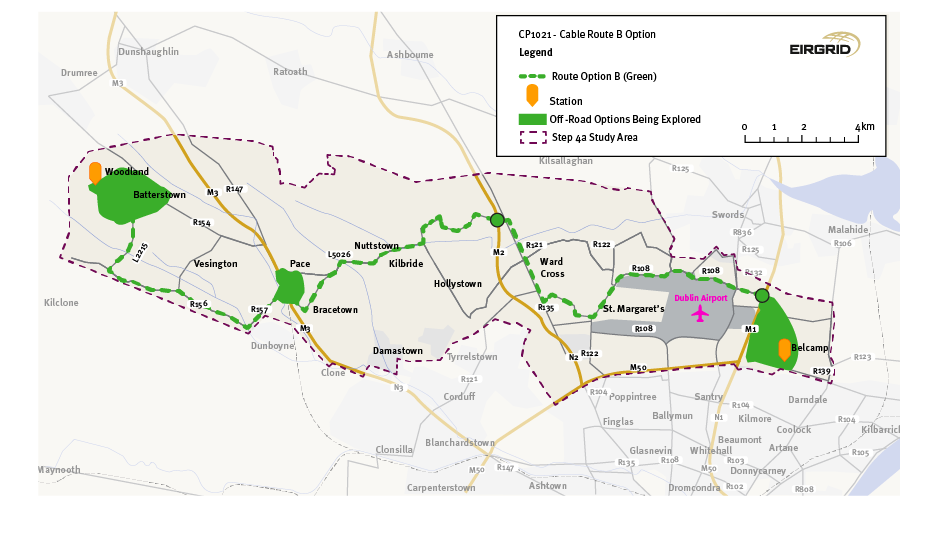 Figure 6: Option B: The Green Option
Click to enlarge and zoom